Country ham is a staple food in our family – you can eat it on a biscuit, with grits, smothered in red-eye gravy….the options are endless. These days, most people get their country ham from the grocery store – nicely shrink wrapped in plastic. My Poppaw remembers when you just cut it directly off the ham hanging in the smoke house . Back then, most people cured their own meat at home, and his family continued to hang hams until the mid-1960’s when the weather became too unpredictable to continue doing it. 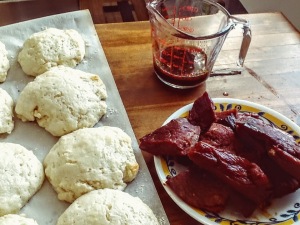 Last January when we had our first pigs butchered, we decided to try curing our own ham in the smoke house my grandparents, great-grandparents, and great-great grandparents had used for nearly a century. It was a cold winter with the polar vortex spiraling across the South, and Poppaw felt like the weather would hold out long enough so that we wouldn’t loose the ham.

First, we packed the ham in a layer of salt, brown sugar, and pepper. We set the ham in a homemade curing box with a slatted bottom, which allowed the moisture to drain. After 3 months, we cleaned off the salt, wrapped it in butcher paper, and hung it in an old pillow case in the smoke house.

And that’s where it stayed till last week when we finally cut into it.

If I am honest, I had reservations about what this ham would be like. I mean, how many people do you know that eat ham out of a pillow case? Despite all, I decided to trust the process…and I am glad that I did.

It was the best ham I had ever had (and I’ve had a lot of ham). Quite frankly, my first thought was that I had truly never had country ham until that very moment in my life. Matter of fact – we should all only ever eat pillow case ham for the rest of our lives.

We ate the fully cured pieces straight off the ham and pan fried the rest…which then lead to making biscuits and red-eye gravy.

Sometimes, on the farm we’ll try doing something the old way and it either won’t work or the new way is faster. While buying country ham from the grocery store is certainly faster….it isn’t better. So the next time that the stars align and we have a polar vortex and a ham on hand…we’ll be whipping out the curing box and an old pillow case. After all, you can’t beat this tried and true method of curing meat!

It is generally well known that I am not fond of cooking. One thing I do like to fix is homemade soup – chicken, potato, sausage, rice….you name it, if it goes in broth I’ll probably attempt it.

Armed with my trusty Hotpoint stove, the only electric stove our house has ever had, I’m fighting tonight’s cold, windy weather with my favorite sausage potato soup.

Begin to brown 1 lb. sausage. In a stock pot, simmer garlic, onions, and a small amount of chicken broth until onions are tender. Add remaining stock and chopped carrots and celery. ** You can substitute celery for Kale**

Allow vegetables and broth to simmer. Wash and slice 3 – 4 potatoes leaving the skin on. I typically use either russet potatoes (they hold up better in soup) or Yukon Gold (I like the texture and flavor the best). Add sliced potatoes and browned sausage to the soup.

Allow soup to simmer until potatoes are tender – then, you are ready to eat!

This is one of my favorite soups to make – it is hearty, tasty, and it reheats well. I’m not the biggest fan of vegetables, so this is also a healthy and sneaky way for me to eat more of them.

Click the image below for a printable recipe card. 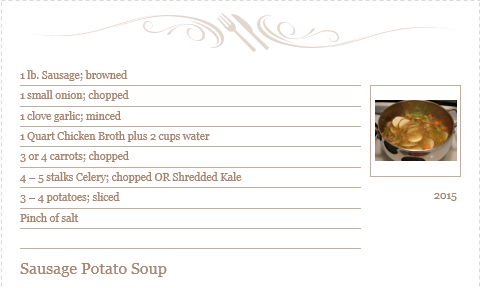